International Society of Typographic Designers / Merit
73 seconds after liftoff, the Challenger space shuttle burst into flames, killing each of the seven astronauts aboard. Among those seven, was Christa McAuliffe, NASA’s top selection to be the first civilian teacher to board a shuttle into space. What was supposed to be a great achievement in the history of space flight became one of the greatest tragedies of the 20th century. Not only were the families of the lost in shambles, the nation as a whole crumbled under the blow. Space flight was no longer looked at with same admiration as before. With one little glitch, the system itself dismantled in no time at all.​​​​​​​

Christa McAuliffe was not only a teacher, but also an icon that represented the average citizen around the world. While many dream of soaring into space, McAuliffe was about to have that dream come true. The Challenge of Losing Seven is an insight into the effects of what losing seven lives can have on a nation, but also what losing a wife, mother, and daughter can do to a family.

Building off the idea of a cinematic experience, the reader is directly thrown into the moments before lift off without any prior knowledge of the flight itself. Using transparent sheets of vellum, the transcript of the launch is spread across several pages in a rising motion. As the reader turns each page, the sense of movement comes to attention while the dialogue continues to rise. With each passing sheet, the reader draws closer to the moment of failure with a visualization becoming clearer on the horizon.

Throughout the book, the typography is pushed and pulled from paragraphs to emphasize the idea of glitches taking place within a larger system, similar to what happened with the Challenger after it launched. These glitches immerse the reader into the system and affect the interaction they have with the page. A modular grid is in place in order to create a greater variation within each page’s composition, while still maintaining a delicate structure with the books pacing. The distorted left aligned shapes refer back to the human interaction with technology that is often imperfect by nature. Systems can fail and the typography wants the reader to walk away with the sense of what was at stake with the launch of the shuttle. In specific moments, small amounts of type take control of entire pages to build a range of emotion that sticks with the reader. While technology can be loud and abrasive, it can also be delicate and meticulous, which is an element that The Challenge of Losing Seven addresses with its typographic treatments. 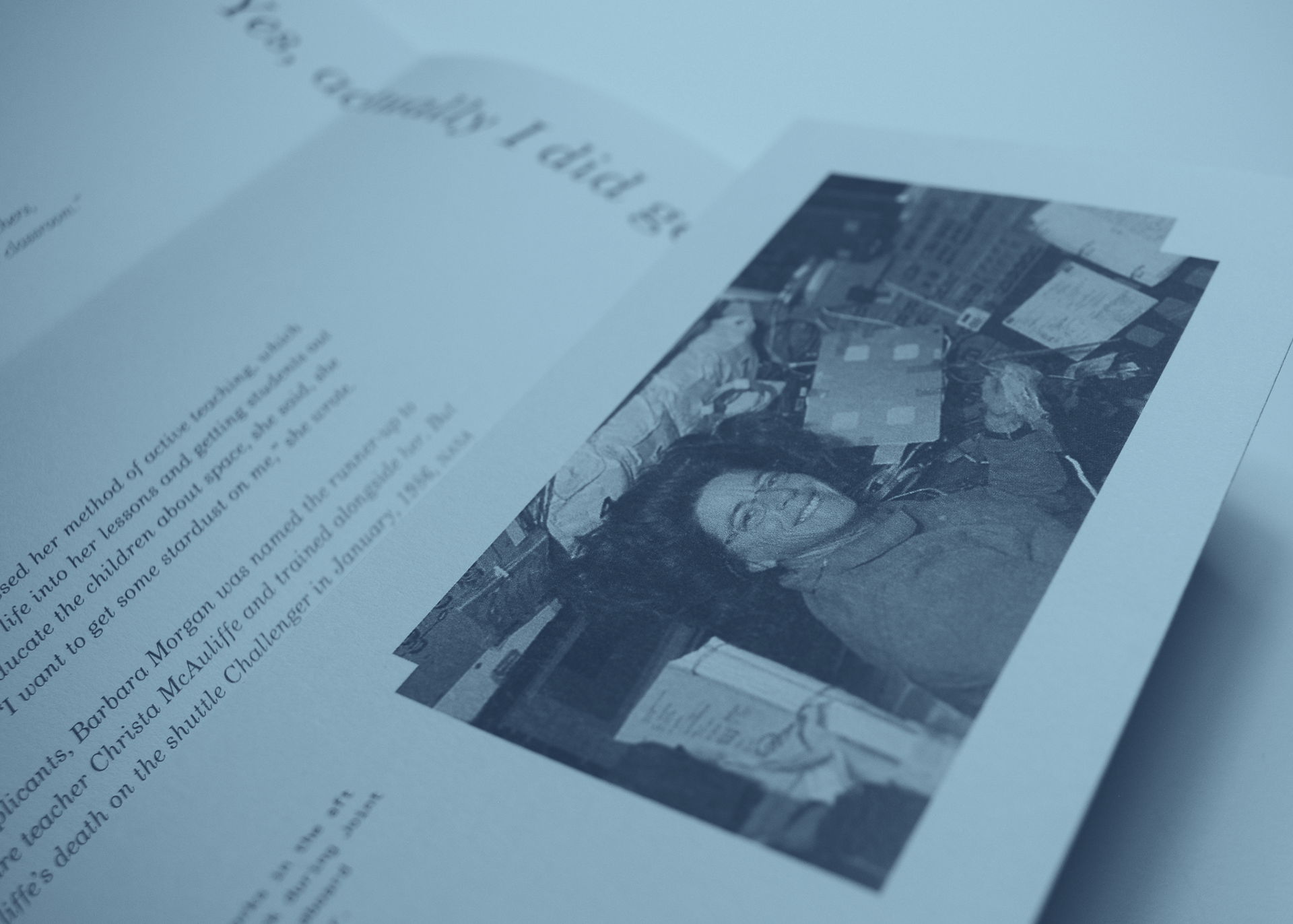 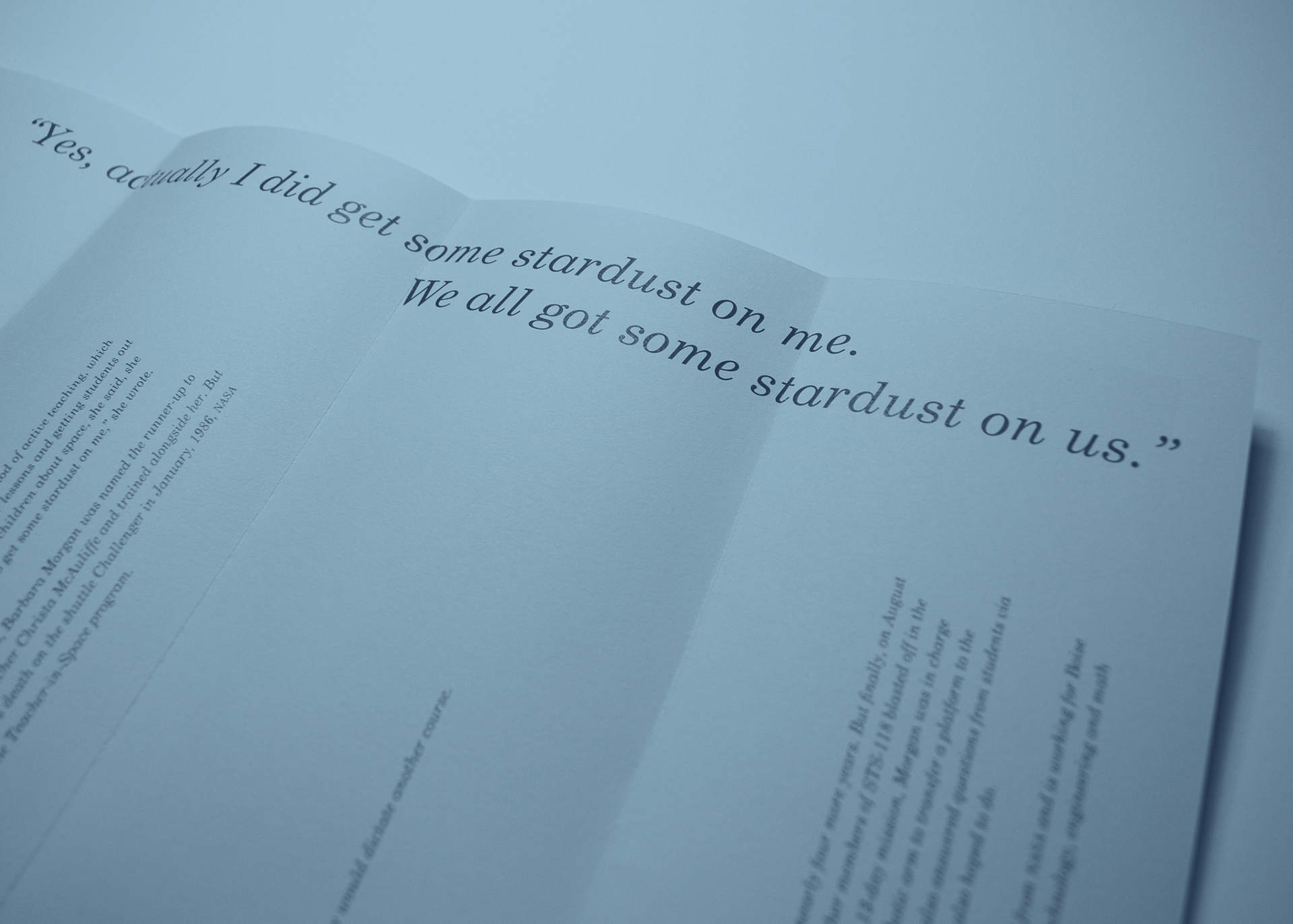 Throughout the main story line there is another layer of typographic narration running throughout the book. This narration is Ronald Reagan’s infamous address to the nation after news broke that the Challenger shuttle had failed during its launch. Using rotated typography, Reagan's words are systematically sprinkled throughout the book. The lighter value of type serves as an echo in the background symbolizing the unification of how the nation felt during this tragedy.

As the reader navigates through the book, they will come across seven asterisks. Asterisks often are used to represent a thought or realization in text. These asterisks that are scattered are visual representations of the seven that lost their lives and how even though they are gone, those lives are still carried on.

Insert copy here, which should vary depending on your region. Accept